Reblogged from flashtrafficblog.wordpress.com
In Uncategorized on August 27, 2013 at 7:23 pm 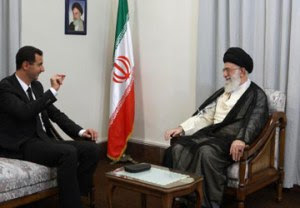 The alliance between Iran’s Ayatollah Khamenei and Syrian President Bashar al-Assad is closer than ever.

(Washington, D.C.) — An Iranian-Syrian alliance preparing for a war with Israel involving weapons of mass destruction?  An Israeli Prime Minister threatening to strike? An American President vacillating over what to do even as the situation gets more and more dangerous by the hour? Sounds like a scenario ripped from the pages of my recent political thriller, Damascus Countdown. Unfortunately, this scenario is playing out in real life and in real time in the heart of the Middle East.
Here are the latest developments:

NEW -- What is Wrong with Yoga? 6 short presentations

YOU ARE INVITED TO VISIT MY NEW "ENGLISH ONLY EDITION" OF THE LIGHT SEED AT: http://lightnseed.blogspot.com

Come and visit my new blog exclusively in Portuguese designed to reach Portuguese speakers all around the world.
"A Semente de Luz" @ http://asementedeluz.blogspot.com.br/

Testimony/Sermon of an Abortion Survivor

I am sure most of you have known at some time in your life a person who wanted or attempted to end their life or succeeded in doing so. Personally, I have known a number of such people. I, myself had such an episode as an adolescent.

More and more I am reading and hearing about people young, old, male, female, gender and age don´t matter that add their lives to this problem of epidemic proportion in our society. Whatever the cause, we can all do something however small to save lives.

An understanding heart, a listening ear is sometimes all that it takes to help weaker, more sensitive people overcome the hopelessness that drives fellow human beings to discard the gift of human life.

Please, take a few minutes to read below the few examples and testimonies about suicide. And please pass it on, if that´s all you feel inclined to do. Thank you.

HE INVITES SUICIDE JUMPERS FOR A CUP OF TEA

Don Ritchie moved to a house outside Sydney, Australia, for the clifftop view. But soon he was stopping suicides by inviting potential jumpers inside for a cup of tea.

Don Ritchie has been awarded a medal for bravery and an Order of Australia (the nation’s second highest honor) for averting hundreds of would-be suicides by approaching people and offering them a cup of tea. ‘I used to sell kitchen scales and bacon cutters,’ he says. Now, ‘I’m trying to sell people life.’

I jumped off the Golden Gate Bridge

"I Jumped Off The Golden Gate Bridge"

Me Before You - an opinionated review from a real paralyzed woman.

A Single Sentence that Saved my Life - Click on the Image -

AS LONG AS THERE IS LIFE, THERE IS HOPE

The Bridges of Constantine my hometown

Collapse of the Petrodollar System

CONSTANTINE- the city of my youth. Memories of yesteryears

The Djurjura Mountains in Algeria

The magnificent mountains I could see from my balcony in winter where I was born and grew up.

Click on the image to know our translation company