Written and published by Jean-Louis Mondon. http://thelightseed.blogspot.com (To read the preceding and following chapters, click on the left lateral bar on the numbered chapters under the title "The Seasons in the Life of a Christian" - Brokenness.)

IV. GRINDING (Lord, It hurts)
Up until now, we had individual grains of wheat from individual stalks that require still a further process before there can be any bread making as such. Verse 28 of Isaiah 28 tells us that: “grain must be ground to make bread”. It is impossible to make bread that stays in one piece with individual kernels. The gluten, sticky substance that holds the loaf together is inherent to the wheat, but the individual grains of wheat have to be ground in order to provide the right consistency and the (glue-like), binding quality that causes the bread to hold together. The flour, ground product, still has everything that was contained in the individual separate grains of wheat, now unrecognizable as kernels because of the transformation process into a workable substance. In the same way, the loaf of bread baked from the flour contains every grain of wheat (minus the chaff) that has been submitted to the processes of grinding, mixing, kneading, rising and finally baking.

Another insight from Oswald Chambers is that “Personality is the characteristic of the spiritual man as individuality is the characteristic of the natural man. Our Lord can never be defined in terms of individuality and independence, but only in terms of personality. “I and my Father are one”. Personality merges and you only reach your identity when you are merged with another person”. (See Oswald Chambers, My Utmost for His Highest. Dec. 12th. On Personality.)

Paul in I Corinthians 10:16 speaks of the loaf of bread as a symbol for the body of Christ that was broken for us, but also of the Church, His body on earth in these terms, “the bread which we break, is it not the communion of the body of Christ? For we being many are one bread, and one body: for we are all partakers of that one bread”. 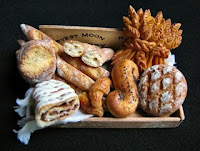 Putting on the New Self The following verse uses  an allegorical image of the spiritual, supernatural Love of God and brings it down to the physical expression of the binding quality of the gluten in the bread that was mentioned above.
Bear with each other and forgive any complaint you may have against one another. Forgive as the Lord forgave you. And over all these virtues put on love, which is the bond of perfect unity. Let the peace of Christ rule in your hearts, for to this you were called as members of one body. And be thankful.… Colossians 3:14-15

Notice the way Paul illustrates the nature of love as the bond of perfect unity when he describes in a practical way what we can do in order to promote peace, forgiveness and bearing with one another´s burden.This is far from the word “Love” that is constantly used ad nauseam until it becomes devoid of real meaning, a love that is insipid, because it lacks the spiritual substance that  the Lord Jesus ascribes to it. Love in its essence expresses the sum of the virtues found in the person of the Lord Jesus-Christ who defines it thus:
No greater love has a man than he gives up his life for a friend.(John 15:13)

How far are we willing to go as His disciples in living  sacrificial lives for the benefit of others?
Because of His love for the multitude, Jesus multiplied the loaves of bread and that´s what Christians are commanded to do: multiply and bear good and lasting fruit, feeding the multitude with the Word of God for "man shall not live by bread alone but by every word that comes out of the mouth of God."

Now we have reached a point of extreme unsatisfied hunger as God has sent a famine of the hearing of the Word of God. "Because lawlessness is increased, most people's love will grow cold. The contrast is so evident to me; Could it be that there a famine because the church has substituted its spiritual mandate for a false gospel of social work and social justice and left a willing and consenting people hungry and thirsty for real food?

As Christians we are called to deny ourselves, pick up our cross daily and follow our Lord Jesus and be the servant of all. As out of His great love for us, He laid down His life we, in turn lay our lives down as an expression of love for the benefit of the body of Christ, so that individually and corporately, we will reflect the life and the glory of Christ for the praise of the Father.


In all three examples of breaking, plowing the ground, threshing the wheat and grinding the flour, the farmer doing the breaking is using the help of an implement like the sharp edge of the plowshare, or an instrument such as a rod or a grinding wheel. In like manner God will allow into our lives a specific tool of His own choosing, a particular circumstance or person fit for the job.

When it happens we have a tendency to look at the instrument and not beyond at our Master-Teacher who is using the instrument for our benefit. Are we able to say at this point, “ not my will, but thine be done”?

Check what Peter says in I Peter 1:7; I Peter 2:21; and what James says in James 1:2 about trials and testing as they relate to faith, perseverance and maturity.

What is most important is the spirit with which we receive the trials the Lord gives us, and our reaction to the suffering they bring. Let us have the same attitude as David who said in Psalm 16:5,6 “The LORD is the portion of mine inheritance and of my cup: thou maintainest my lot. The lines are fallen unto me in pleasant places; yea, I have a goodly heritage”.
We want to live in the blessed presence of our Lord, don’t we? David poses a pertinent question when he asks in Psalm 15: “LORD, who may dwell in your sanctuary? (v.1), He who keeps his oath even when it hurts”(v.4b).

We, as disciples, have promised to follow Jesus no matter what happens, no matter where He takes us. Well, in John 12:26 Jesus says: “Whoever serves me must follow me and wherever I am, my servant will be also”.

Is our Lord grieving over the condition of His church and that of the lost people in the world He so dearly loves and died for? If so, we will be grieving with Him and be moved to obedient action directed by the Holy Spirit.

However, my brothers and sisters rejoice, for He also said to His disciples: “I tell you the truth, you will weep and mourn while the world rejoices. You will grieve but your grief will turn to joy”. And then, we can say like David:
“You turned my wailing into dancing, you removed my sackcloth and clothed me with joy, that my heart may sing to you and not be silent. O LORD my God, I will give you thanks forever”. (Psalm 30:11,12).

Remember also that Psalm 126: 3 declares:
“The LORD has done great things for us, and we are filled with joy. Restore our fortunes, O LORD, like streams in the Negev. Those who sow in tears will reap with songs of joy. He who goes out weeping, carrying seed to sow, will return with songs of joy, carrying sheaves with him” . Amen

“All this also comes from the LORD Almighty, wonderful in counsel and magnificent in wisdom”. (Isaiah 28:29).
Brother Jean-Louis. Thanksgiving day 1998.Revised and corrected June 2007.Revised and Illustrated January 2013;
Posted by Jean-Louis at 6:44 PM